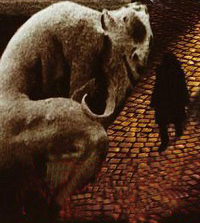 I was looking at an artist’s rendition of the devil the other day, a horrible, non-human, scaly sort of creature. Very unpleasant to look at. Something you’d really, really hate to run into on a dark street at night, which is where the creature seemed to be standing in the picture – looking straight at you, as if you would make a good bedtime snack.

Then I thought about II Corinthians 11:14: “… Satan himself transforms himself into an angel of light.” It was a warning about deception, not to be carried away with pleasant appearances.

I concluded something at that point: we shouldn’t be carried away with unpleasant appearances, either.

The devil didn’t appear to Adam as a creature of darkness. He appeared attractive, charming and delightful. Intelligent, friendly, helpful. Full of advice.

As I thought about what he might have looked like, the Lord said, “Think Solomon.” Handsome, smart, rich, and wise. Oh yes, definitely informed and knowledgeable about eternal things. Wise.

Adam didn’t turn from worship of God to worship of himself at that point, as I sometimes thought in the past. He knew only a life completed by worship. He didn’t contemplate abandoning worship of God. Worship was as natural as breathing.

He did contemplate the idea of becoming like God, however, able to understand and fellowship with God in a better fashion – doesn’t that sound like an excellent idea? What a wonderful gift that would be to present to creator God!

Genesis makes it clear that Adam was by Eve’s side during this conversation with Satan. Eve, the efficient helper, checked out the delicious fruit first to be sure it was okay, then passed it along to Adam.

The moment they took and tasted it, they did it in agreement (read obedience) to a perfectly sensible suggestion from a charming and wise and beautiful person. Their allegiance switched from creator, the real God, to Satan the false god.

Their constant spiritual link to the creator vanished, like losing the signal on your cell phone.

Think what would have happened if they stayed in the garden and decided to partake of another delectable fruit, from the tree of life. Their only chance to ever re-establish their link with God would disappear. In his infinite mercy, God took steps to prevent that further disaster. He removed them from the garden.

Being removed was for their protection, more than a punishment. Through the eventual  efforts of Jesus and the Holy Spirit, the spiritual link between God and human beings was re-established. It seems like it took a long time, to us. But what is a few thousand years to God? Considering eternity…

One more thought. Matthew 27:52-53 may include Adam and Eve, who knows. This refers to the bodies of saints (i.e. those who died in faith, looking for the coming of the Messiah) being raised from the dead after Jesus’ resurrection and being seen by people living in Jerusalem. Neat.