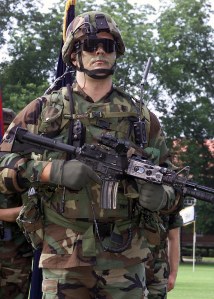 “Just because you’re paranoid doesn’t mean they aren’t after you.”
— Joseph Heller, Catch-22

I’ve been thinking about armor lately. The apostle Paul told the Ephesians, “Therefore put on the full armor of God, so that when the day of evil comes, you may be able to stand your ground, and after you have done everything, to stand.” (Eph. 6:13)

You don’t wear armor to play tennis. Or golf. Or lay around on the beach. Or just to work in an office, or push a vacuum, or cook dinner.

It got me to thinking. Who does wear armor? Who even owns armor? Hmm. Soldiers. People who are trained to fight, who know what armor is for and how to use it. People who know there’s going to be a fight – not just a scuffle, but a serious fight. Up close and personal, with somebody out to hurt you. To kill you.

If you read through Paul’s epistles, you’ll see that he didn’t write the same things to everybody. He wrote to the Ephesians things that he didn’t tell anyone else. So, then, they don’t apply to anyone else, right?

Well, that would be nice, if it wasn’t for the fact that the devil doesn’t hate Ephesians only. In this fight, we all need this particular armor, whether on the tennis court, the golf course, in the office and in the kitchen. Every place can be and often is a battlefield in the spirit.

Here’s that whole passage from Ephesians:

Finally, be strong in the Lord and in his mighty power. Put on the full armor of God, so that you can take your stand against the devil’s schemes. For our struggle is not against flesh and blood, but against the rulers, against the authorities, against the powers of this dark world and against the spiritual forces of evil in the heavenly realms.

Therefore put on the full armor of God, so that when the day of evil comes, you may be able to stand your ground, and after you have done everything, to stand.

Stand firm then, with the belt of truth buckled around your waist, with the breastplate of righteousness in place, and with your feet fitted with the readiness that comes from the gospel of peace.

In addition to all this, take up the shield of faith, with which you can extinguish all the flaming arrows of the evil one. Take the helmet of salvation and the sword of the Spirit, which is the word of God.

And pray in the Spirit on all occasions with all kinds of prayers and requests. With this in mind, be alert and always keep on praying for all the Lord’s people. (Eph. 6:10-18 NIV)

Paul, a Roman citizen, is describing a Roman soldier’s armor – notice, every piece is worn in a place where Jesus shed his blood, from head to hand to foot. Some sandals even had metal spikes in the soles. 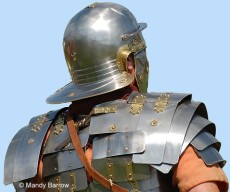 Particularly notice, the back of the breastplate was also armored.

Some people claim the armor is only on your front, so you’re supposed to only advance. That’s not true. Isaiah 58:8 says that the glory of the Lord will be our rear guard (rereward, rear-ward in KJV).

An offensive weapon, a sword presupposes offensive actions by a soldier trained in wielding it. The fully equipped Roman soldier had two swords, a short one and a long one. The short sword was used for hand-to-hand fighting – this is the word used in most of the New Testament. A long sword or javelin was worn over the soldier’s right shoulder – this is the word used for Jesus’s two-edged sword in Revelation.

“Having done all to stand, stand…” it says in the King James Version. Done all… all what?

Having acknowledged the need for this armor, having acquired it, clothed yourself with it and trained in its use, stand up strong in it. That sounds like we’re defending something, doesn’t it? And we are.

Standing firm in your own faith is not all we do, of course. Spreading faith, advancing the kingdom of God is the Christian’s primary business. But if you’re so busy fighting off attacks in the mind, emotions, health, family, job, reputation, etc., you won’t share your testimony much. You won’t advance the kingdom much.

Reading the news from around the world, I realize just how much of a war is going on. How violent, how hate-filled, how horribly cruel – how evil – the attacks on Christians are. How much we need God’s full armor! Too many believers in this country assume it will never happen here.

3 thoughts on “Armored, front and back”