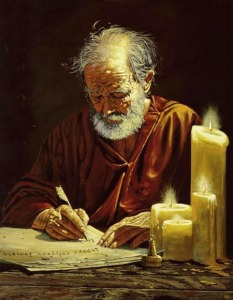 The word follow here is from the Greek mimetes, meaning mimic, imitate. Be like me. Do what I do.

Hmmm. Just how did Paul follow Christ? Reading the book of Acts (beginning at chapter 9) and Paul’s epistles, we find that he:

Was a citizen of Rome AND a faithful Jew, highly educated and well learned in the scriptures
Went on a zealous rampage to stomp out this “Way,” (the new religion,) imprisoning or killing believers and confiscating their property
Had a supernatural encounter with Jesus
Temporarily lost his vision
Obeyed Jesus’ instructions
Was saved, healed, baptized in the Holy Spirit
Accepted his assignment
Preached the gospel
Prophesied
Healed the sick
Raised the dead
Cast out demons
Was stoned, raised from the dead (or near death)
Mentored young believers
Recruited helpers, both men and women
Appointed other leaders (ordained elders)
Performed many miracles, even by way of his work clothes – “And God wrought special miracles by the hands of Paul: So that from his body were brought unto the sick handkerchiefs or aprons, and the diseases departed from them, and the evil spirits went out of them.” (Acts 19:11-12)
Testified to religious and government leaders
Wrote many letters (epistles)
Worked in a secular job (tent maker) to support himself

Of course, along the way he had some opposition…

In addition to the many events recorded in the book of Acts, see Paul’s own testimony in II Corinthians 11:23-28:

Abundant labors
Stripes above measure
Imprisoned frequently
Near death often
Beaten with rods
Stoned
Travel, by land and by sea
Shipwrecked x3
Unspecified perils in water, by robbers, his own countrymen, the heathen, in the city, in the wilderness, in the sea, and among false brethren (persecuted by Judaizers)
Weariness
Painfulness
Watchings (sleeplessness)
Hunger and thirst
Fastings
Cold
Nakedness
Had the care of all the churches
Was arrested and put on trial for blasphemy

Question: Was Paul writing to only a specific few, when he said be followers of me, as I follow Christ? Or was he talking to ordinary people, businessmen and women, factory workers, housewives, students, in other words, everyone?

For more about Paul’s life following Christ, also see What Paul Did While Weak, https://estherspetition.wordpress.com/2012/10/27/what-paul-did-while-weak/