My personal journey to know Abba Father, elder brother Jesus, and constant companion Holy Spirit is ongoing, very much a present-tense process. Every day I get to know him a little bit better. Every day he shows me himself  better, and also myself better – ways in which I should and can grow and mature.

He shows me the world in all its complexities, both natural and spiritual, sometimes taking me behind the scenes to see what is really going on. That is sobering and at times I would prefer to avoid it. Necessary to intercede, he tells me, I’m right here, don’t be afraid.

Every day he is more fascinating to me, more terrifying, more affectionate, more… just more. The following was written years ago, as I tried to explain to puzzled friends my love for Daddy God. 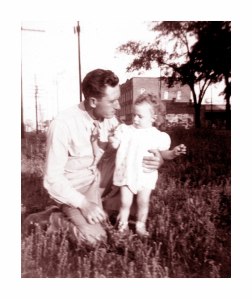 When I was two years old, I knew my daddy, in some ways. I knew him as a photographer, as mama, brother Harold and I were his frequent subjects.

I didn’t know him as the recovering alcoholic who sponsored other men struggling with that addiction themselves. Or as a banjo player, barbershop quartet singer or ballroom dancer. Yet he was all those things, to other people.

To two-year-old me he was just a marvelous big creature who loved me. He was a smiler. A carrier-on-the-shoulder. A hugger and tickler who got down on the floor and played baby dolls with me, or wound up the wobbly spinning top for me, over, and over, and over.

He let me climb up in his lap when he was trying to read the newspaper, and he’d read the funnies out loud to me. He was a food taster who offered me little bites of his grown-up meals. He was a goofy “mareseatoats” song singer and a “once upon a time” story reader. 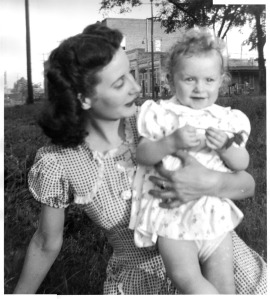 Sometimes he pointed that square box at me and called, “Smile,” which I probably did most of the time. I still have the black and white prints to prove it.

I didn’t really understand the definition of father yet but I knew the word daddy. And I knew my daddy, in all the facets of my two-year-old personal relationship with him, limited though they were.

A few years later I knew my daddy as mama’s best friend, who would dress up in a fancy suit and necktie and go somewhere with her, who herself was dressed up in a frilly dress and high heels. Off they’d go to some place I couldn’t go. Baby sitter time.

He was the chauffeur to any places we went as a family, the bill-payer when we went to the movies or out to eat, the final declarer of the absolutely perfectly decorated Christmas tree, the slow present opener who (like so many other gentleman of his era) used his pocket knife to carefully unstick the scotch tape and avoid tearing or wrinkling up the wrapping paper.

I also knew daddy as occasional nay-sayer and occasional deep thinker. Can I, daddy, can I have that? might result in long moments of deep thought before daddy’s well-meditated “no” answer was forthcoming, complete with reasonable, logical explanation. Only in cases of youngster temper-tantrum threats did he resort to “because I said so,” but if daddy said so, it was so.

In my pre-teen years I got to know daddy as a good tic-tac-toe player, Chinese checker player and monopoly player. I got to hear him play his banjo and sing four-part harmony. 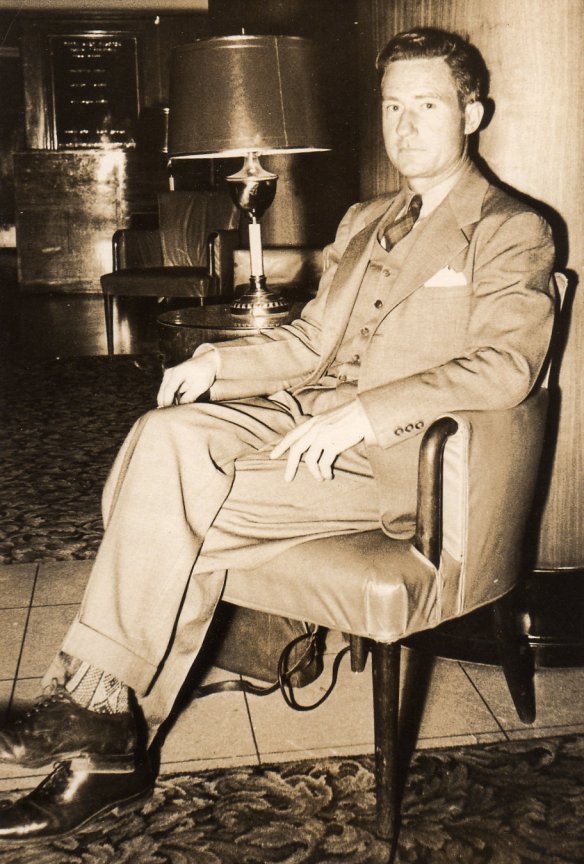 Daddy’s camera and tripod were never far away. He took this shot of himself in the lobby of the Sanborn Hotel in downtown Florence, probably during one of those “dress-up” occasions with mama.

I also discovered that mama and daddy weren’t always in perfect agreement – sometimes they had slightly loud discussions, at least that’s what they called them. Not yelling, not arguing, not fighting, but discussing points of view that sometimes clashed. I never listened and therefore I have no clear idea what those differences were all about. It’s probably just as well. (Conflict between them disturbed me greatly, they knew it and so those disagreements usually took place out of my ear-shot.)

In my early teens, I began to know daddy as the family bread-winner who sometimes couldn’t work, who was suffering from service-related heart disease, caused by rheumatic fever contracted during WWII. He died of a heart attack when I was 16 years old.

Over the years I have come to realize that daddy was a multi-faceted personality, including a multi-faceted father to my brother and me. I knew him, but not as well as I would have liked, and the opportunity to know him better ended for me in 1960.

But I have another daddy! God the father – Abba, daddy – who I also know, though not as well as I would like. That opportunity is still open to me, and I want to learn more and more about the many facets of Father God’s personality, and my relationship to Him.

Not just know ABOUT him, the way I know about my earthly daddy from relatives and friends, I want to KNOW him. I believe He wants that, too.

3 thoughts on “Who’s your daddy”