Acrocorinth mountain fortress (one Temple of Aphrodite was located there), with the Temple of Apollo below. Both were in ruins at the time of Paul’s visits.

“Casting down imaginations, and every high thing that exalts itself against the knowledge of God, and bringing into captivity every thought to the obedience of Christ.” (II Cor. 10:5)

Paul was quite familiar with “high things” in Corinth, high places such as the walled summit of Acrocorinth as well as the various temples to gods like Aphrodite, Apollo and Poseidon. Their worshipers sought love, peace, and protection with many forms of worship, including temple prostitution.

Worshipers sought success in life, whether it was good weather and good crops for farmers, safety in sailing the seas, excellent sales for merchants, the right mate, healthy children, good government, peace and calm, freedom from war.

Whatever the need, there was a temple to that god. Right worshiping, right offerings, right behavior – those were sure to produce right results. Right? Maybe not.

For “high things” Paul used the Greek word  hýpsoma, meaning an elevated place, height or high thing. Specifically it referred to an elevated structure, a barrier, rampart, or bulwark, high things such as walls built for protection around cities, temples, or castles. They were barricades to keep people out.

Only one other New Testament verse uses this word and there it is translated height: “Nor height, nor depth, nor any other creature, shall be able to separate us from the love of God, which is in Christ Jesus our Lord.” (Romans 8:39)

Temples made with hands were everywhere in Corinth, just as in Athens, Rome, and Ephesus. Operating these temples was big business in this prosperous Roman colony. Who did this foreigner think he was, saying they were fakes? False? Phony?

Paul preached “The God who made the world and everything in it is the Lord of heaven and earth and does not live in temples built by human hands.” (Acts 17:24) Persecution was the inevitable result for Paul and the new Christians, then as it is today. Truth isn’t popular when it comes to big business, big money from immoral worship.

Everyone I know wants love, peace, protection and provision, including me. And they are indeed available, but not from false believing, not from false gods or false worship. Believing the wrong things puts up a barricade to experiencing and knowing the true God, his love, mercy, forgiveness, grace and power.

Paul warned about those wrong “high things” everywhere he went, including Corinth.

The following is from PBS (In the footsteps of Peter and Paul) about the city of Corinth and Paul’s visits there: http://www.pbs.org/empires/peterandpaul/footsteps/footsteps_6_1.html

“After this he went to Corinth. Here he met a Jew named Aquila, who, with his wife Priscilla, had come from Italy recently because Claudius had ordered that all Jews leave Rome.”

“Paul approached them and, because they were of the same trade, he stayed with them and worked with them. They were tentmakers. He also engaged in discussions in the synagogue each Sabbath, attempting to win over both Jews and Greeks.” (Acts 18.1-4, 11)

Paul could have approached Corinth from Athens by land or by sea. After settling in, he spent his days in Corinth plying his trade and preaching in the synagogues with his hosts Aquila and Priscilla. The couple had left Rome with the Jews expelled by the emperor Claudius, and like Paul they were tentmakers. The tents they made or repaired would have been in demand for soldiers, travelers, and market stalls. Large, heavy and colorful, the tents were usually made from leather and heavy canvases.

The rhythm of city life in the Mediterranean would have found Paul at work from early morning until midday, leaving off work in the hot hours of the afternoon, and resuming later in the day. For eighteen months he built his community in Corinth, and he would return to Corinth more than once over the next years. When he left, he was joined by his friends Priscilla and Aquila. Paul was headed back to Antioch, but the couple would stay in Ephesus, and found a fledgling Jesus community there.

Located on the south side of the isthmus connecting the Peloponnese to the mainland, at the foot of a mountain fortress, Corinth was the capital of the Roman province of Achaia. A great lighthouse and Temple to Poseidon guided ships into the harbors, to fill the city markets and the warehouses down on the wharves with merchandise from the around the empire and beyond — spices from India, silk from China, linen from Tarsus, local Corinthian marble and variegated marble from Turkey, Greece, and North Africa, timber from Italy, and wine and olive oil, fruits and vegetables from fertile fields of Corinth.

Ships were dragged across the isthmus on a road called the diolkos, and in 67, Nero would begin to build a canal — using the labor of 6,000 Jewish prisoners from Judea — though it was never finished in antiquity. The city had made a remarkable comeback after its total destruction at the hands of the Romans in 146 BCE. The entire city had been razed-its people killed or enslaved.

Julius Caesar revived the city as a colony in 44 BCE, and by the mid-first century CE, Corinth had the largest population in Greece, a population that would swell with visiting sailors and merchants to the ports, and tourists attending the festivals of athletic games. Corinth served the nearby Isthmian games, an ancient international athletic festival held every two years. Dedicated to Poseidon, the victor’s prize was a crown of wild celery. Contests included chariot and foot races, and literary contests.

The games were revived in the Roman period, and added to with games in honor of Caesar. Two days journey from Corinth was the city of Epidauros, which had one of the most important sanctuaries to Asklepios, the god of healing. Pilgrims would come from around the empire in hopes of healing.

Because of its great wealth and transitory population, Corinth had a reputation for luxury, and uninhibited pleasures. This reputation was further bolstered by the city’s association with Aphrodite — her image appeared on the city’s coinage, and Corinth had at least three temples to the goddess of love, including one on the very high summit of Acrocorinth, where she held a shield before her like a mirror.

In addition, the harbors had their own temples to the goddess of love. In pre-Roman times, one temple of Aphrodite was served by temple prostitutes, and, though modern scholars debate whether ritual prostitution had ceased by the time of Paul’s arrival, there is little doubt that prostitution would have thrived. Brothels have been excavated in several Roman cities, including Pompeii and Ephesus.

But Aphrodite was important to the city in other ways, too. Born out of the sea, she could protect the sailors and ships on which the city’s economy depended. And Julius Caesar, the city’s colonial patron, claimed descent from Venus, the Roman form of Aphrodite.

The new city of Corinth is located east of the ancient city. A canal was finally built through the isthmus in the late 19th century, but sections of the diolkos are still visible. The excavations at ancient Corinth give some idea of the city’s former prominence; a Temple to Apollo has standing columns, and some streets and market shops can evoke the flavor of the trade city.

Along one side of the Forum is a bema – a platform from which Roman officials would address the public. Here the governor may have refused to arrest Paul. There is a museum onsite.

The mountain fortress Acrocorinth still looms over the site, and the view from the summit is well worth the hike. Also on the summit are ruins of the Temple of Aphrodite, among others.

The fortifications on the mountain are, in the main, much later than the Roman period, but indicate the continued strategic importance of the site for centuries. The harbor town of Cenchreae is largely underwater, but warehouses and a sanctuary of Isis are visible.

Nearby Isthmia, site of the biannual athletic contests, has a museum and remains of the stadium, city walls, and the sanctuary of Poseidon. In Epidaurus, the sanctuary of Asklepius is undergoing excavation and some restoration. The well-preserved theater at Epidaurus presents live theater in the summer. 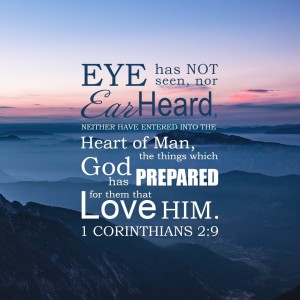 I received a lovely card one day from some friends, and I truly appreciated the card and the handwritten note on it. Printed on the inside front cover was a familiar Bible verse:

“But as it is written (see Is. 64:4), Eye hath not seen, nor ear heard, neither have entered into the heart of man, the things which God hath prepared for them that love him.”

That’s where the quote ended on the card. But that’s only part of the Apostle Paul’s statement in I Corinthians. Without the “rest of the story,” that part is really misleading.

Paul’s statement continues in verse 10, “But God hath revealed them unto us by his Spirit…” How neat!

If we pay attention to the voice of the Holy Spirit, we can have a glimpse of the things God has prepared for us who love him, wonderful things. Reunions. Parties. Worship. Assignments. Fellowship. Learning. Sharing. Laughing.

David Marcy, Pastor of Kingstree United Methodist Church, said a comforting benediction at the cemetery after the funeral of my mother-in-law Ora Lee Cox, and he mentioned Ora Lee having peace now.

Instantly the Holy Spirit spoke to me and added – and a PARTY!

I suddenly got a mental image of a wonderful celebration going on in heaven with Ora Lee at the center, a for-real party with Jesus, Holy Spirit, Father God, and all of Ora Lee’s family and friends (especially her son Tim, grandson T.C., husband Theron, and her mom Annie) hugging and laughing and enjoying themselves immensely.

I couldn’t be sad after that moment. I was sorry for us, for all of us who will sorely miss her and T.C. and Tim, but I can’t be sad knowing where she is and what she’s probably doing.

From now on, whenever I see that incomplete fragment of Paul’s comment about heaven, I’m going to think, “PARTY!”