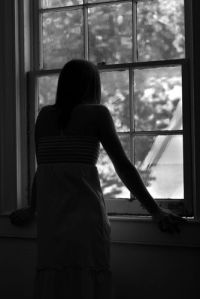 Since I’ve been re-reading and studying Philippians, some things keep coming back to my mind. Memories of other lessons from this book, some quite a while ago… like “I can do all things through Christ which strengtheneth me.” (Phil. 4:13 KJV)

It was early evening and my children were off somewhere with their friends. I had no friends.

There was no place I could go, or wanted to go, because somebody I knew might be there and they would go out of their way to avoid actually speaking to me. And besides, I had no money.

I had a good time wallowing in self-pity. Sometimes I paced around the darkened room, sometimes I stared out of the windows overlooking the street, watching a few cars go by. Sometimes I examined the sparse furniture in this rented apartment bedroom, wondering who had lived there before. But who cares, I thought, they were no doubt better off than I am.

And after a while, I heard a quiet voice intruding into my thoughts. Are you through?

And yes, I was through – for now. I realized that he had been listening to my rant, not arguing back, not zapping me with lightning bolts for being rude. Just being patient, patiently waiting for me to be through.

I CAN do all things. I CAN DO THIS.

Out loud I began to repeat any verses I could think of. Scripture songs I had memorized. Psalm 23. I began to thank him for the ordinary things, like the clothes I had on. The shoes I wore. The fact I actually had a roof over my head and food in the kitchen. That my teenage children had clothes and food.

I began to praise him with clenched teeth for who he is. Not what he does for me, or gives me, but just for who he is. Almighty. Creator. Alpha and Omega.

After a few minutes I realized my attitude had changed, my feelings had changed. Although my feelings of hopelessness and loneliness had not totally vanished, they weren’t as dreadfully painful.

The praise and gratitude became real. I was exhausted and exhilarated at the same time, recognizing how much had evaporated from my emotions. I was surprised. Surprised and puzzled.

The voice of the Holy Spirit spoke to me again. Better now?

The year was 1978. My children and I had left our beautiful home and mini-farm, left a situation of abuse that had become intolerable to them and to me. What now, God, what now? was like a broken record running around in my head.

One thing now, I had learned a valuable lesson. Praising God doesn’t stroke his ego, doesn’t increase his power, doesn’t do anything for him. But it certainly had done something for me. 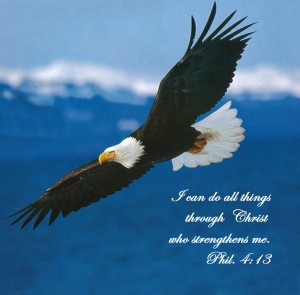 “I can do all things through Christ which strengthens me.” (Philippians 4:13)  I memorized that verse many years ago when I was going through some tough times.

A divorced woman whose married friends had suddenly become “busy” all the time, a single parent with growing teenagers to raise, sometimes no car, always too many bills and never enough money to pay them with, sometimes I had a hard time keeping a positive, Christian, faith-filled attitude.

I would stand in the middle of my bedroom floor and repeat that verse with clenched fists and teeth, refusing to give in to depression, frustration, and anger toward the Lord.

Whispers of “Why me?” ran through my mind and heart. It was tempting to demand that out loud – “Yeah, God, why me?”

Occasionally I did say it aloud, but then would determinedly follow it with that verse. I’d say, “No matter what it looks like, God, no matter how I feel, I will praise you. I will thank you for Jesus. I can do this. I can get through this. I will survive this!”

And I did. Amazingly, usually my hurt and anger would subside in a few moments and I could go on with my day, as though I hadn’t just been having a pity-party. A not-too-spiritual temper tantrum. The Lord brought me through those times with my faith a bit battered but intact. Even better than intact, actually; stronger. (I learned by experience what John 10:10 means.)

I was thinking about Philippians 4:13 this morning and decided to do a word study using an online Strong’s Concordance. (http://www.eliyah.com/lexicon.html) Here’s what I found:

. To be strong in body, to be robust, to be in sound health
. To have power as shown by extraordinary deeds
. To exert, wield power, to have strength to overcome
. To be a force, avail
. To be serviceable
. To be able, can

. Individually – each, every, any, all, the whole, everyone, all things, everything
. Collectively – some of all types

Christ = Christos: anointed. Christ was the anointed one, the Messiah, the Son of God. However, this word doesn’t actually appear in the original Greek verse. It was added by the translators.

which = ho: A definite article such as the, this, that, or these. Means the particular one.

. To be made strong; endue with strength, strengthen
. To receive strength, be strengthened, increase in strength

.  Inherent power, power residing in a thing by virtue of its nature, or which a person    or thing exerts and puts forth
. Power for performing miracles
. Moral power and excellence of soul
. The power and influence which belong to riches and wealth
. Power and resources arising from numbers
. Power consisting in or resting upon armies, forces, hosts

me = me:  personal pronoun I, me, myself

All of that was really good in helping make the verse even more meaningful. Then I took a look at the original Greek and found only a few words. Literally translated, they would say:

“Empowered am I for all things by the Empowerer of me.”