Prayer is a linchpin, the Holy Spirit told me one day. It’s not the only one; it is just one of many supernatural linchpins. Linchpins that have prevented some things in the past will start moving this year. Linchpins can also cause things. They will also begin moving this year.

As I tried to recall what linchpins were, he continued speaking.

If you unravel a rope, untwist the cords and strands and lay out the individual threads, the rope becomes longer. Sometimes much longer.

To refresh my memory I looked up that word, linchpin. Originally it referred to a pin that ran through holes in an axle and wheel, preventing the wheel from falling off. They have been found in ancient chariots and wagons.

Some linchpins prevent things from coming together, like in a hand grenade. When the pin is pulled, two things make contact and cause an explosion. 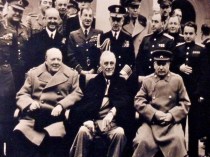 In political circles, it refers to a person and their work, or to a specific event that causes another larger event in the world. During and after World War II, Allied leaders British Prime Minister Winston Churchill, U.S. President Franklin D. Roosevelt and USSR’s Joseph Stalin met a number of times. Historic linchpins, they are called.

The Lord went back to discussing rope. He showed me an unwound rope with one end tightly fastened. Hundreds of individual threads were stretched out in a fan-like pattern. Each thread end was attached to something different, a different linchpin. Some were people, some were events. Here are a few of those:

– Buying something from a particular store on a particular day at a particular time
– Traveling at one time rather than another
– Traveling by one route rather than another
– Taking one job rather than another
– Speaking to someone that causes behavior or actions to occur
– Publishing an article in one of various venues, print, television, radio, internet, etc.
– Reading that article and then doing something because of it
– Meeting certain people, sharing and learning specific information
– Being in a certain place and time that acts as a catalyst
– A weather event that causes delays or cancellations
– A solar event that disrupts electronic communications, resulting in faulty or erroneous messages, or missed data, such as spy satellites, communication networks or weather satellites not receiving information and/or not transmitting information, which results in other things happening or not happening

He showed me many other examples, too many to list, ending with the most important one of all:

Praying God’s will onto the earth.

The most critical linchpin of all is a prayer that allows God to intervene on earth, gives him permission to act in certain situations, with certain people, places and times.

Then he showed me the rope in his hand, slowly twisting the fastened end to regather the threads into cords, the cords into rope. As the rope turned, it shortened, and the linchpins began to move out of their individual places, away from whatever they were keeping together. The final results will be an event the Lord has planned.

I don’t know what that is, he didn’t tell me. Middle East warfare? Another Great Awakening? Both of those is what I’ve been feeling for months now.

No matter what it is, every linchpin is important. Praying what God says to pray is the most important one of all.

2 thoughts on “The linchpins are moving”