Blasphemy against the Holy Spirit

“And the scribes which came down from Jerusalem said, He hath Beelzebub, and by the prince of the devils he casts out devils.

And he called them unto him, and said unto them in parables, How can Satan cast out Satan?

No man can enter into a strong man’s house, and spoil his goods, except he will first bind the strong man; and then he will spoil his house.

Verily I say unto you, All sins shall be forgiven unto the sons of men, and blasphemies wherewith soever they shall blaspheme: But he that shall blaspheme against the Holy Ghost hath never forgiveness, but is in danger of eternal damnation.” (Mark 3:23-29 KJV; See also Matthew 12:31 and Luke 12:10.)

Large crowds were following Jesus, watching him heal the sick and cast out demons. He had even come into the synagogues and disrupted the normal routine of things, casting an evil spirit out of one man, healing another man who had a withered hand, and healing a woman who had been bent over for 18 years. Jesus called her a Daughter of Abraham. (Luke 13:10-16)

Soon the religious leaders began to follow him around too. Not to get healed themselves, you understand, but to find a way to get rid of Jesus. And so, “experts” came down from Jerusalem and accused Jesus of casting out demons by the power of Beelzebub, the devil. They said that he himself had an evil spirit.

Jesus pointed out a matter of common sense: neither a kingdom nor a house divided against itself can stand. He added, if I cast out demons by the power of the devil, by whose power are your sons casting them out? But, he said, if I cast out demons by the Spirit of God, then the kingdom of God is come unto you. (Matthew 12:27-28) And indeed it had.

It strikes me sort of funny: these religious men criticized Jesus for doing things they themselves were doing, or should have been doing.

Lots of opinions have been written about that, by lots of religious experts, lots of theologians. There are severe laws against blasphemy in some countries; in some, it is a capital offense.

You may think he didn’t really die on the cross to pay for your sins, or if he died, he wasn’t raised from the dead. Maybe you’ve just heard the gospel for the first time and it seems like a ridiculous, made-up story.

The Holy Spirit is doing his job, regardless of what you think about Jesus today. (See John 16:8.) Tomorrow you may change your mind and believe that he is exactly who he says he is. Once you accept his invitation and exercise natural human faith, he gives you his supernatural faith, God’s own faith.

Then what happens? At the same time you receive the Holy Spirit, the same Spirit who inhabited Jesus. He was on the outside, persuading you of the identity of Jesus and the truth of the gospel. Now he is on the inside of you, changing you, teaching you, leading you, enabling you to do things you couldn’t do before.

But — if you persistently refuse the ministry of the Holy Spirit, you never come to believe Jesus. You resist the persuasion, you deny the truth, you make a choice to un-believe. A deadly choice.

Blaspheming the Holy Spirit is denying his identity, denying the identity of Jesus, and denying yourself a chance to be inhabited by God’s Spirit. To be changed.

Was this a nightmare? Just a dream? Or a prophecy? 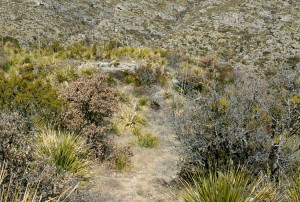 As I slept last night, I had an unusual dream. I seemed to step into a scenario that had already started. It was the middle of the night, and the middle of a journey.

Four or five men and women were making our way along a wilderness trail, led by an experienced trail guide.

All were dressed warmly, wearing backpacks or carrying knapsacks with essential belongings. I was next in line behind the trail guide, the others straggling in single file behind us.

We were strangers to one another, on this odd journey. We were in hiding, escaping from danger and heading towards somewhere safe, we didn’t know exactly where. The guide had promised to get us there without being discovered, if we followed his instructions.

The terrain was rugged, rocky and overgrown, the path barely discernible to me. There were no really tall trees, just scrub brush and weeds. The dark sky was mostly clear, the air thin and cold. Dim but adequate light was provided by the moon and stars, aided by the sparing use of the guide’s heavy-duty flashlight. Wyoming came to mind as I looked around. Why? I’ve never been there, have no idea what it would look like.

A couple of other trail guides had broken off and were angling away from us. I watched them make small marks in the underbrush as they went, leaving faint indications that someone had gone that way. Where are they going? I asked the guide.

Laying down a false trail so we can’t be followed, he explained.

They can’t make the signs too obvious, I thought to myself inside the dream. They have to make the false trail look real. I shivered as I realized just how dangerous this trek was, why being so quiet and so careful was important.

The next dream scene was a little later. The sky was still dark as we reached an ordinary looking house on the outskirts of a small town. The guide opened the door and we crowded into the living room and kitchen, milling around and asking – where are we?

A safe house, the guide said. A place to rest and re-stock. He turned on a corner lamp, leaving overhead lights dark. Curtains and drapes were closed.

Does someone actually live here? I asked him. Yes, he said, they maintain it for the travelers, keep it stocked with food, supplies. Extra stuff people might need.

I knew we wouldn’t be staying there long, perhaps just until the next night. In hiding, we couldn’t afford to be discovered. We had to get to our destination, a place further north where we could be truly safe.

Standing back from the kitchen window a little, I looked out at the sleeping town. I could hear the others whispering to each other, finding places to rest a few minutes before preparing some sort of meal.

Dawn wasn’t far away. I knew we needed the break, needed to rest, but there was such a sense of urgency in my spirit…

At that point I awoke, wondering what I had just taken part in. The images were so vivid, the urgency so clear in my mind as I came wide awake.

Perhaps it was an urgent call to intercession, a call of warning to the American church. What is happening now in Mosul could happen here.