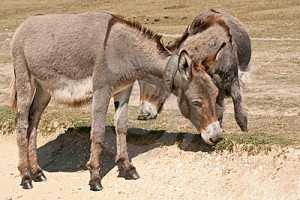 Discouraged. Hurt. Angry at God. Disappointed. That’s how I was feeling one morning, after a lot of discouraging things had happened the day before.

And so I had a conversation with the Lord about faith (which I had been studying more about recently).

I told him that it seemed to me faith wasn’t real; that the scriptures about faith weren’t true. The things I had believed in faith when I prayed just were not happening.

I said a lot more than that, of course, but basically I was deciding as I talked that it was pointless for me to pray for anyone or anything, or even go to church any more. What was the point, if what the Bible said would happen when we prayed really DIDN’T happen? If there were no results?

The colt? I began to remember. The week before Passover, on what we call Palm Sunday, Jesus told the disciples to go to a specific place, find a specific donkey and colt, and bring them back to him. (Matthew 21, Mark 11, Luke 20, John 12.)

I visualized that, could almost see the disciples looking at each other, shrugging their shoulders with unasked questions.

What did the disciples think Jesus was up to? Why did he want a donkey? He and they walked everywhere, didn’t they? We know now why he did it, Matthew 21:5-6 says it was so the prophecies would be fulfilled. But did the disciples know that? Whether or not they knew why, they obeyed him. They went and collected the colt.

“What were the results?” the Lord asked me. That required more thinking on my part. Well, there were several levels of results…

This journey on the donkey’s back, the praise from the crowd and the upset Pharisees were necessary steps to instigating the crucifixion by the right date – Passover.

Okay, I said to the Lord. So what does that mean for me, for my prayers, my desire to see you DO something when I pray? What does all that have to do with faith at all? He recapped for me what I had just been thinking:

So there are short term results, mid-term results, and long term results. Obviously some answers to prayer, God’s plans, may take a really long time to arrive. But they will arrive.

Then I began to consider that faith question, again.

Faith comes to everybody, but not everybody takes it. (Faith comes by hearing, according to Romans 10:17.) Children have to be told something first, in order to have faith, i.e. trust, just as adults do. A child learning to walk, for example.

“Walk to Mama,” we say. “Come on, you can do it!” We can show him how, help him stand up and get his balance, but we can’t walk for him. The child must obey our words and do something that requires trust in the person speaking. He must take that first, perhaps wobbly step, then another.

He can obey or refuse to obey. If he obeys and experiences positive results, i.e. takes a step or two without being hurt, he acquires trust that this will work. That trust leads to another few steps, i.e. more experience in walking, and more experience becomes stronger trust. Faith that yes, he can do it. He can walk. And pretty soon, he is walking, and running.

That process began with hearing words from someone speaking to him, him trusting the one speaking, accepting those words and obeying them. The faith was actually contained in the words of the trustworthy speaker, but it wasn’t forced on the hearer. The hearer was never forced to accept the words as true or trustworthy, he had to make a choice. Choose to believe the person speaking, or not believe the person speaking. And choose, sometimes really often, to keep on believing.

“Remember the donkey,” the Lord said. That was pretty much the end of my conversation with him that morning, but I’ve been thinking more about it since.

Getting answers to some prayers – certain long term results – seems like too much hard work for many of us. Too much painful trouble. Too much stress. Too much time, too much energy, too much disappointment, too much anguish. Too much waiting.

That’s what I was thinking when that familiar voice interrupted my thoughts with a whisper: “Long term results begin with short term results.” I thought some more.

I began to think about the Olympics. About Usain Bolt winning an Olympic gold medal in running… how did that begin? Well, it began with him hearing those first words, “Go for it, you can do it, you can do it.” It began with him believing those words and accepting them as true. Stepping out to obey, to try, to gain experience. To fail sometimes but not quit. To fail sometimes, and succeed sometimes, and eventually win the gold medal.

How long did that process take? How much experience? And how much reinforcement?

Faith comes by hearing, present tense, not having heard, past tense. How many times did a parent, a coach or a team-mate say those words of encouragement to Usain Bolt, “You can do this, you can do it!” And so he did.

The first thing I did after that conversation was to apologize to the Lord, to repent and ask forgiveness for my attitude, and to ask for his help in reinforcing my faith. What I asked him for is stubborn, determined, persistent, persevering, teeth-clenching, gutsy faith. I think that’s what he wants me to have. What he wants all his children to have.

I want to “Remember the donkey” today, and every day, as many days as it takes.